Bethel, once known as Brandon, was once an obscure town said to be 16 miles from everywhere.  It was just another crossroads village until the railroad came through and it began its rapid rise to being a leading town in Pitt County.

Due to increased settlement in the area, the Flat Swamp Primitive Baptist Church was organized in 1776, some four miles east of the crossroads.  In 1814, a Methodist Episcopal Church was built at the crossroads and for some time the settlement that grew up around this church was known as Old Bethel or Crossroads.

About 1840, Oliver Spain built a store at the crossroads and it served as a voting place and muster area for the local militia.

As early as 1866, Fernando C. James was listed as a doctor at Bethel, Pitt County.  In September 1870, the name Bethel was changed to Brandon, the name being used until the town was incorporated. 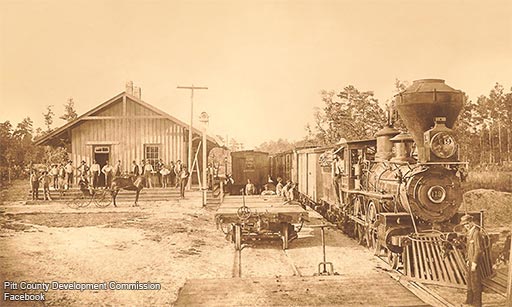 In late 1882, the Seaboard and Raleigh Railroad reached Bethel.  It was the first and for a while the only railroad in Pitt County.  People from Greenville and the surrounding areas had to come to Bethel to catch the train.

In 1883, Bethel was a village of nearly 200 inhabitants.  There were 10 merchandise stores, including M. O. Blount and Sons, Guilford Andrews, F. C. James, and J. E. Langley.  In addition, there were two doctors, Dr. R. J. Grimes and Dr. F. C. James; one steam sawmill (which exploded in April 1883) operated by Dr. R. J. Grimes; one church (Methodist); a dancing school taught by Professor D. N. Duggan, and one coachmaking shop operated by Albert Ward.

In 1884 J. T. Vines and a Mr. Rouse ran a shingle factory in Grindle Creek Swamp about three miles from Bethel.  They built a tram road two miles to the Albermarle and Raleigh Railroad, whereon they shipped 100,000 shingles a week to Baltimore, Md.  They employed 50 men making 6-inch shingles for market and 5-inch shingles for the local trade.  They later made staves and employed 18 men in that business.  Also in 1884, Joseph Peal built a large steam sawmill in Bethel.  Then in 1888 he formed a copartnership with McG. Bryan in the sawmill business and moved down the railroad about three miles from Bethel.

In early 1887 Professor Z. D. McWhorter opened the Bethel Academy with a military department attached under the management of C. H. James.  Later in 1887 Dr. C. H. James rented the Bethel Academy and opened a school there, on September 12, 1887, having Miss Blanche Caspari of Virginia as teacher.  In February 1888 Z. J. Whitfield opened a male and female Commercial School in the academy, teaching business education to all ages.  Whitfield Business School flourished for a number of years.  In 1889 Professor McWhorter returned to Bethel and operated another school into the 1900's.

The year 1888 was memorable for Bethel when in March the first newspaper, the Bethel Herald, was published by Messrs. Albert Ward and Brother and Whitehurst and Co.  It was described as a newsy little sheet of 16 columns, with a subscription of $1.00 per year.  The name was changed to the Bethel Voice in April 1889 with Robert Ward of Ohio as editor.

In June 1892, the Greenville Odd Fellows instituted a Lodge in Bethel with 16 members.  In Oct. 1893, W. A. Manning & Co. and J. P. Ward both opened new stores on Main Street and the town was thrown into excitement when the boiler to the Mangum Mill near the railroad depot blew up. 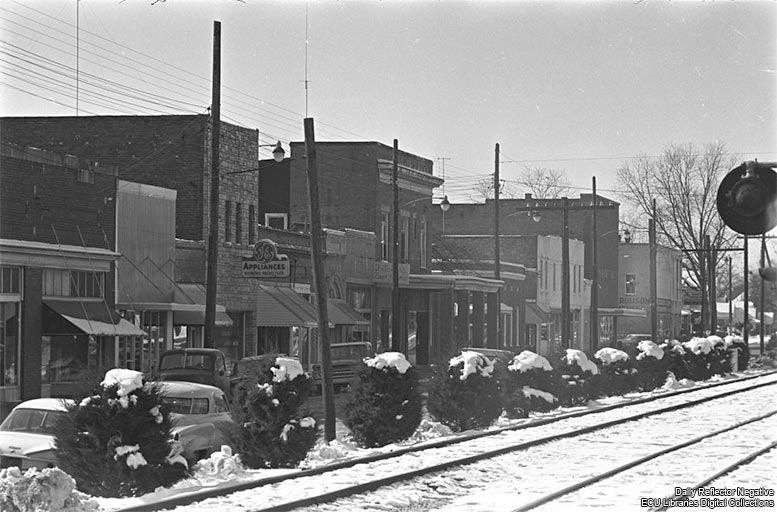 On December 19, 1895, a firebug started a fire in the store of R. J. W. Carson and it burned all 12 stores on the east side of Main Street and partly burned the residence of  Theophilus Carson across the street.  It took several years for Bethel to recover, but its enterprising merchants rebuilt the business portion of town even better.  S. T. Carson rebuilt a two-story brick store and upstairs fitted up a hall for balls and entertainment.  The upstairs was also used by the Odd Fellows once a week for their meetings.  By 1897 there were 10 merchandise stores in Bethel including:  J. C. Taylor & Co. (started in 1895); Staton, Cherry & Bunting (started in 1890); B. R Whitehurst (started in 1895); Knox & Co. (started in 1894); H. P. Butler (started in 1897); S. T. Carson (started in 1897); and Blount & Brother.  There were two millinery stores, Mrs. W. H. Bullock in the Bethel Hotel and Miss Alice Carson.  There were also the Bethel Hotel, managed by McG. Bullock and owned by Blount and Bro., one large sawmill with grist and cotton mills attached, two doctors, the Bethel Male and Female Academy run by Professor B. F. Hassell, Jr., and a number of private schools.  It is interesting to note that in1897 Bethel had a town ordinance prohibiting the selling, trading or bartering of cigarettes in the town under a penalty of five dollars for each violation.

On the evening of March 28, 1899, the town of Bethel was visited by a terrific tornado which demolished the Baptist Church, tore off the roofs of Blount Brothers Hotel and J. C. Taylor & Co., destroyed the black Baptist Church and Odd Fellows Hall and blew down or damaged numberous houses.

In 1900 Bethel saw a business boom with a number of unique businesses starting up.  The Nansemond Truck Package Co. made barrels, crates, and baskets for shipping vegetables until 1903 when it moved to Greenville.  Messrs. Robert Staton and F. B. Gardner operated a brick manufactory for a number of years.  Professor C. H. James built a school desk factory in 1900, which he sold to Holliday and Gardner by 1903.  Tables, cabinets, lawn swings, screen doors, etc., were also made in the factory. 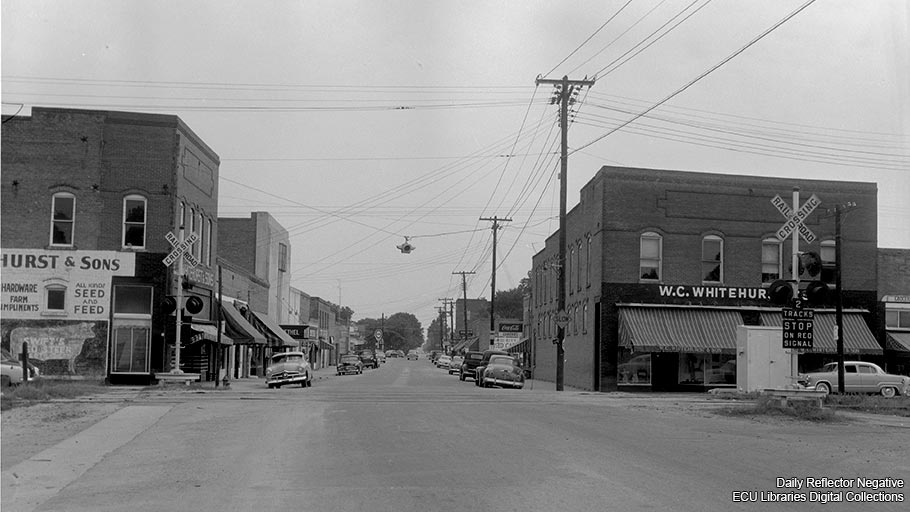 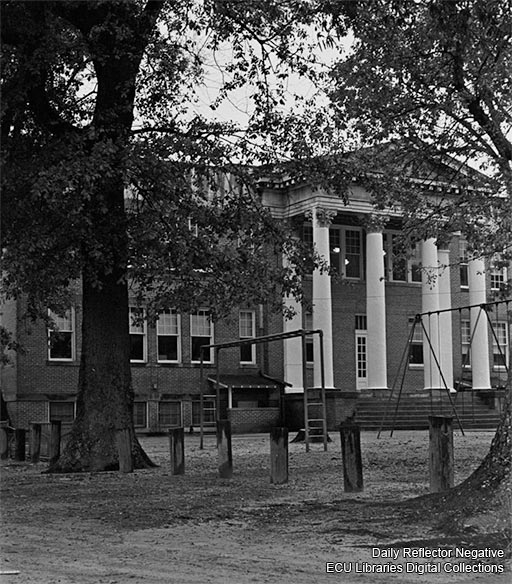 In 1910, Bethel had a population of 500 and a tax rate of 20 cents on $100.  The town officers were:  S. T. Carson, mayor and McG. Bullock, chief of police.  Doctors were Drs. Guy F. Thigpen, V. A. Ward and F. C. James.  The Matinee Drug Company (the former F. C. James Drug Store) was operated by Miss Mable Barnill, one of the few women druggists in the State.  There was the Bethel High School with J. B. Martin as principal; the Bethel Bank and Trust Company, and the Pitt Building and Loan Association which was incorporated in Bethel in 1910 with 75 subscribers.  The leading stores were:  Blount Brothers, J. R. Bunting, Staton, Taylor & Mayo, J. J. Ford, J. E. Carson, and Bryan & Manning.

In Jan. 1911, the Bethel Masonic Lodge #589 was chartered and Dr. M. P. Manning opened a dentist office in town.  In 1912, the Audrey Ford Company became the first car dealership in Bethel.